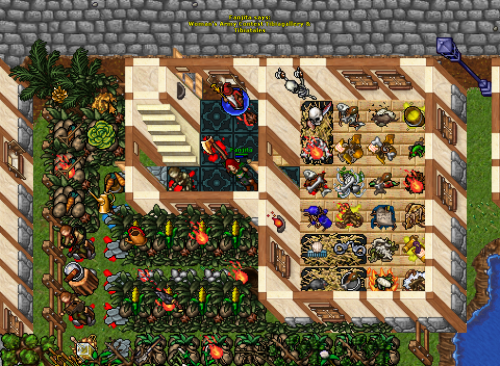 In my contest work I want to show you hard times when both Bella and Aylie were slaves.

They were kidnapped and worked as slave harvesters in illegal veggies plantation in Thais. They mostly watered and harvested carrots and corncobs or planted and picked up lettuce and mandrakes. Plantation was just in front of main street but hiden enough behind dense jungle. They had to live in inhuman conditions. They shared a single room with another girl from Carlin. Unfortunately the girl couldn’t stand the pressure of hard work. The criminals let her die in that room making Bella and Aylie watch this. This room was their kitchen, toilet, bedroom and living room at once. They had to pee in bucket, eat from the ground. There were trashes flying everywhere around as they couldn’t even tidy the room. As you can imagine that huge amount of trash caused presence of rats and other insects.
But..
Carlin’s secret service knew about that place. They were observing the habits of guards because they were not strong enough to fight in regular conditions. They learned everything about that place. Since then they were waiting for right moment to attack. And it finally came. It was sunny and beautfil day. Guards thought it will be another regular day when slaves do their jobs and go to beds without meal. They couldn’t be more wrong. They decided to chill and drink whisky in the sun. They underestimated power of alcohol and got drunk really fast. Secret service hiding in nearest woods noticed it and decided to act. Few amazons instantly got into plantation by killing a guard standing on watch by the doors with a golden axe which they got from helpful dwarfs. After that they cut throats of 2 plantation guards who were passed out in the garden. Bella and Aylie were rescued and could finally feel safe after a very long time. As the Amazons rescued Bella and Aylie they decided to burn the whole plantation so no more people can suffer in that haunted place.